Daylight Savings has me all messed up. I couldn’t sleep last night, so I let my mind wander. I found myself thinking about how I missed blogging. My various writing projects have made it difficult for me to keep it up. Earlier this month, I submitted the first draft of Stones River National Battlefield’s administrative history for review. I did not want to write a project update, but I kept thinking back to the park’s Black History Month events in February. I got out of bed, found my laptop, and here we are.

The strangest thing about the Stones River project for me has been drafting the last chapter, because it covers a period that I am familiar with—the Civil War Sesquicentennial. I discuss how the park has been at the leading edge of embracing the theme, “From Civil War to Civil Rights.” These efforts can be traced back to 1998. That year, park staff helped organize a conference in Nashville for Civil War battlefield superintendents and stakeholders called “Holding the High Ground.” The takeaway from this meeting was that the NPS should do a better job incorporating other stories beyond military history into the narratives they tell at Civil War parks, particularly slavery as a central cause to the war.[1] However, incorporating this vision into park interpretation took time.

Stones River National Battlefield has especially strong partnerships with Middle Tennessee State University’s Department of History and the Tennessee Civil War Heritage Area, which have helped the park incorporate new scholarship into its interpretation. Dr. Rebecca Conard, in particular, and her graduate students at MTSU have helped bring to light the story of Cemetery community, an African American post-emancipation community that settled on the battlefield but was later removed by the War Department to create a battlefield park.[2]

As planning for the Sesquicentennial geared up, the NPS chose the theme “From Civil War to Civil Rights.” This theme provided a framework to connect the legacies of the Civil War to the 50th anniversary of the Civil Rights Movement.  Staff at Stones River took on the charge. On New Years Eve 2012, the 150th anniversary of the battle, park staff held a vigil at a nearby African American church and did a program about the Emancipation Proclamation. There were no reenactments that first day. Despite more inclusive programming, few African Americans attended the 150th anniversary programs.

Like parks across the system (as recently discussed on NPR), Stones River National Battlefield has had a difficult time reaching diverse audiences. It was not for lack of interest or effort on part of the staff. It took the leadership of an outward looking superintendent, who was adept at engaging community members in the park’s mission. Gayle Hazelwood was able to reinvigorate the Friends of Stones River National Battlefield, which was largely inactive upon her arrival in 2012. The Friends group in turn established a committee on African American history, but still struggled to bring in people of color. I remember attending a meeting last year with the purpose of planning an African American history event with only white people present. It was not very encouraging. But Gayle kept at it; she met with members of the African American Heritage Society. They became involved and helped plan a fantastic program of events at the park for Black History Month that centered on the story of Cemetery community. 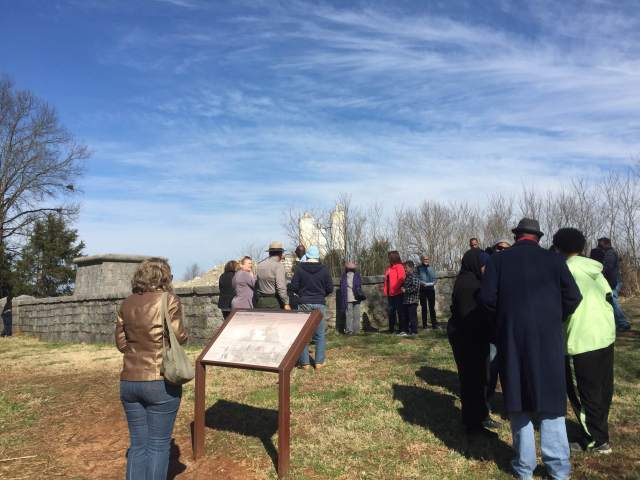 For the first Saturday, the park organized a bus tour of historic Cemetery community. We began at the visitor center and then drove to Stones River United Methodist Church, where we heard resident Boe Washington speak about her memories and knowledge of Cemetery community. We then headed to Van Cleve Lane in the park, where Tiffany Momon, an MTSU graduate student, talked about the Cedars portion of Cemetery community. Our next stop was Evergreen Cemetery, the local African American cemetery where residents held Memorial Day celebrations for many years. Our last destination was outside the Hazen Brigade Memorial wall, at the grave of William Holland, where a United States Colored Troop (USCT) reenactor told us Holland’s story in first-person. We ended the tour back at the visitor center. The tour was a great way to provide a visual and spatial understanding of Cemetery community, both historic and current, by including stops that showed spaces historically occupied by African Americans, but no longer extant, and the spaces their descendants continue to use today. The tour also kicked off the new cell phone tour of Cemetery community developed by the park that can be downloaded by visitors. This tour is available through the OnCell app.

The second Saturday felt like a daylong celebration. Park staff provided a big tent for the day’s activities. Local African American singers gave amazing performances, singing powerful music that told the African American struggle and the freedom promised by God. Boe Washington and Anthony King, who both grew up in Cemetery, talked about their life experiences. There was an art show inside the visitor center and the USCT had an encampment nearby. Perhaps my favorite part of the day was a spoken word and dramatic performance about life in Cemetery community, centering on the moment when Rowena Minter received a letter telling her that the government wanted to buy her farm for the park. I was amazed at how well the script and actors so effectively brought this dramatic episode to life, capturing the emotions of the prospect of having to leave one’s home. I was so enthralled that I came back in the afternoon to watch the performance again. Thanks to good weather, there was a full audience for both the morning and afternoon programs. It also attracted regular park visitors, who stopped to see what the hubbub was about.

At one point a friend said to me, “Can you believe that this is happening here?” I shook my head. This programming was everything that many of us hoped the Sesquicentennial would be. We hoped it would be inclusive and engaging to bring in new audiences to Civil War sites. Staff at Stones River had good intentions, but they needed more time and the right guidance to develop meaningful relationships to make such programs possible. But if I am suggesting that this is the end of the Sesquicentennial, is the job done? Not by a long shot. This is just another point in the interpretation continuum.[3] I hope that the success of this program will provide the necessary momentum to help the park delve into the legacies of Reconstruction and continue to nurture this relationship with the Rutherford County African American Historical Society.

As I gear up to meet other public historians in Baltimore this week at the National Council on Public History meeting, I will keep this experience in mind as we discuss “Challenging the Exclusive Past.” I freely admit that I did little to plan this program. Its success can only be attributed to the members of the Rutherford County African American Heritage Society, park staff, and members of the Friends of Stones River National Battlefield. I attended planning meetings to lend my support and be a cheerleader. Obviously, I was there for the events and encouraged others to attend, but really I was in a good position to observe. I think Stones River National Battlefield’s experience reaffirms that telling new stories is a great way to bring in new audiences, but partnerships are key to ensuring that these stories are actually heard by new audiences. Otherwise, they are just new stories being told to old audiences, which can be helpful in some respects, but does not fully challenge the “exclusive past.”

[2] See Rebecca Conard, “The Changing Face of the Country: Environmental History and the Legacy of the Civil War at Stones River National Battlefield,” George Wright Forum 28, no. 2 (2011): 161-81.

[3] John Hennessy, “Touchstone: The Sesquicentennial, the National Park Service, and a Changing Nation,” Common-Place 14, no. 2 (Winter 2014).

This entry was posted in Uncategorized. Bookmark the permalink.

Digitized bits of Middle Tennessee History. How much do you remember?

A Historian in Training

Stories, Thoughts and Finds as a Student of History

From the National Association for Interpretation

Adventures of a newbie museum professional and lifelong history nerd

Life, the River, and Beyond

Preserving the material life of the early South through service

Strategies and ideas to connect people with historic places

Just like the horse whisperer - but with more pages